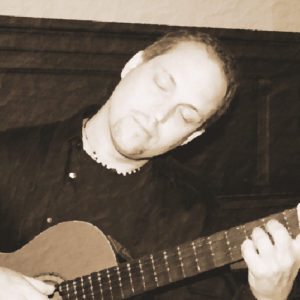 AGeoff Hlibka is a Toronto based composer and guitarist versatile in a multitude of styles. Geoff started music at the age of eight, first with a short stint on ukulele, then a few years later on organ. At age 12, inspired by a friend who also played, he started learning the violin. At age 15 he found his lifeʼs calling when he picked up an old nylon string guitar. Thus began his obsession with the guitar and composing music of all types. He went on to study at Humber College's renowned music program. After finishing college, Geoff started the band Mystic Fools and recorded a full length CD. The group went on to open for some of Canadaʼs legendary bands including Blue Rodeo, April Wine and Kim Mitchell. Geoff has since gone on to perform with Billboard charting artists as well as tour with different groups across Canada, the United States, Caribbean and Africa. As a recording artist his guitar playing, bass playing and singing can be heard on a wide range of commercial recordings as diverse as Latin, dance, pop, rock, rap, exercise and childrenʼs music as well as on TV stations (CTV, TSN) and international music libraries. A number of these recording have gone on to become gold and platinum albums. Geoff is currently recording new acoustic instrumental music as well as songs for Mystic Fools.on!